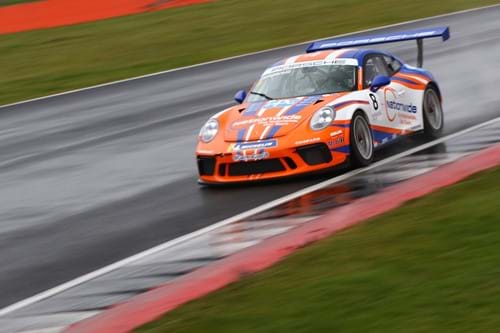 As the world leader in coatings and specialty materials, PPG are proud to be joint sponsor to Dino Zamparelli in the Porsche Carrera Cup.

Zamparelli will compete in a brand-new Porsche 991 GT3 Cup Gen II car. With a powerful four-litre, six-cylinder boxer engine, producing 485 hp, it promises an even more adrenalin-fuelled championship for 2018!

The 25 year old from Bristol will return to the Porsche Carrera Cup racing with 10 time title winners Redline Racing.  You could say racing is in Zamparelli's blood with his father Mike being a former F1 Powerboat racer. Mike’s encouragement ensured Dino began flying around in a Go-Kart at an early age and it didn’t take long for a love of speed to develop.

"I was about 6 years old, and I had this little red Go-Kart where I lived, it was quite quick for a 6 year old! I loved speed, and anything with four wheels and an engine, from that moment onwards!"

Zamparelli is a two-time runner up in the Championship. With an amazing 25 wins and over 65 podiums in his 173 competitive career, Zamparelli is hungry for success and is focused on winning the title this season. Before entering the Carrera Cup, Zamparelli’s experience includes FIA Formula 2 and GP3, plus a successful GP2 test.

Apart from racing, Dino is a keen tennis player and footballer, playing regularly in a 5-a-side team with his friends. The talented driver can also speak French and Italian fluently; having spent 7 years living on the French/ Italian border and racing in Italy for 3 of those years. His favourite quote is 'Its hard to beat somebody who never gives up' and is painted onto the back of his racing helmet.

With the season getting underway in April and ending in September, you can keep up to date with Zamparelli's progress here with the below race reports or by following him on Twitter https://twitter.com/DinoZamparelli