PPG Refinish UK & Ireland are proud to announce that their partners, M&M Fix Auto Stoke have become the latest bodyshop to revolutionise their paint mixing operation with the install of MOONWALK™: The latest innovation in refinish paint mixing technology.

M&M Fix Auto Stoke, one of Staffordshire’s leading accident repair facilities, repairing an average of 100 cars per week for their multiple insurance and 17 motor manufacturer approvals, has recognised the advancements and benefits that MoonWalk will bring to their business.

M&M Fix Auto Stoke has been operating for over 30 years with a healthy mix of insurance, corporate and retail work that maintains their strong volumes. Deep connections with businesses and schools in their local community as well as their desire to continually invest in people, training, technology and equipment make M&M Fix Auto Stoke the perfect MoonWalk partners. 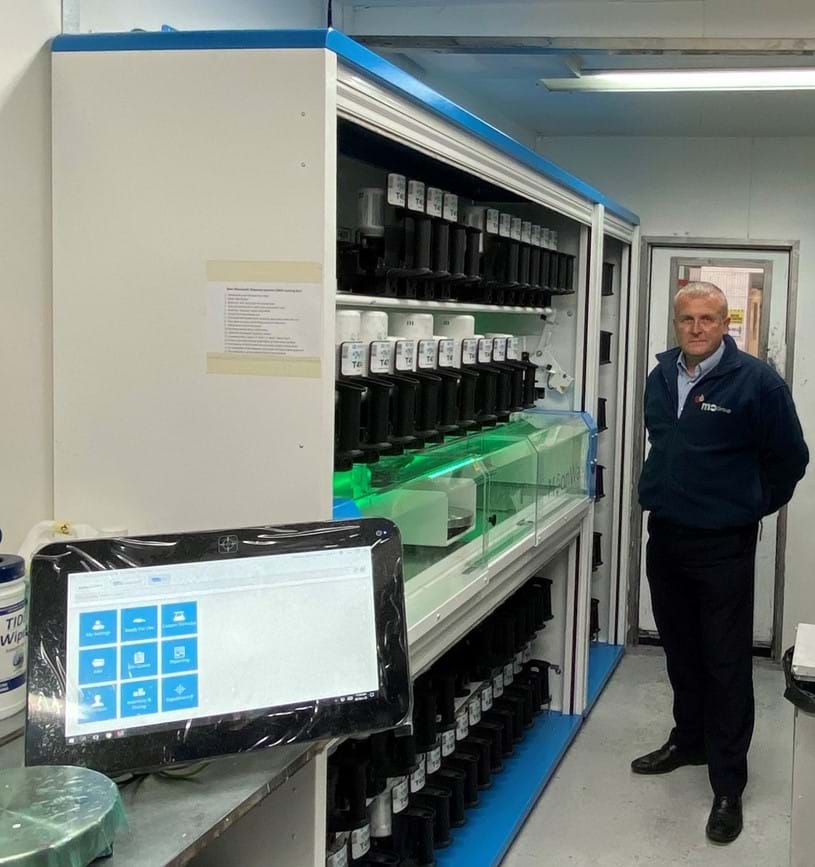 M&M Group Director Adrian Leese had this to say when asked on the decision to install MoonWalk, “Our relationship with PPG has gone from strength to strength over the many years of working together. We have been watching the progress of MoonWalk and it’s possible benefits over the past few months and have now decided it will be a perfect fit for us and are excited to see the improvements this will bring, not only in the paint environment but throughout the business”.

PPG’s constant support and innovation throughout the partnership have been key to M&M’s success and constant development, this factored greatly in M&M’s decision to upgrade their mixing process. Adrian continued, “M&M and PPG have for many years, partnered the latest technology projects, ranging from high speed products to the latest materials on the modern motor vehicle, introducing MoonWalk into the business further binds our commitment to providing the best we can offer to both our customers and Insurer Partners.”

MoonWalk’s unique automation delivers unrivalled benefits to bodyshops, such as an average 9% material saving thanks to the 10x more accurate dispensing technology. Furthermore, a reported 1-2 hour productive labour saving per day has been seen by current MoonWalk users, freeing up skilled painters, which has ultimately increased bodyshop throughput in comparison to conventional manual mixing processes.

Angela Henry, M&M Customer Service Director and Vice President of the Insurance Institute of Stoke explained the operational benefits that resulted in the decision to install MoonWalk.  “MoonWalk is replacing the conventional PPG scheme, and working together M&M and PPG have installed MoonWalk into the Longton site, and hope that along with their already very experienced paint mixer they can push the efficiency and productivity even further and see great results.” Angela concluded, “MoonWalk is an all in one system which eliminates waste and automates the process. The paint mixer can match colours using PPG’s RAPIDMATCH® spectrophotometer, then once the colours are uploaded, he can leave MoonWalk to do the rest, freeing up valuable time to use elsewhere in the business.”

MoonWalk has had an incredible first year delivering increased productivity, material savings and elevated throughput levels across Europe, Middle East and Africa bodyshops. PPG continue to remove the pains of their customers through their commitment to innovate and challenge the norms of the refinish industry and are proud to welcome M&M Fix Auto Stoke on this journey to the new era of refinish paint mixing.