Dan Cammish wins back to back Porsche Carrera Cup 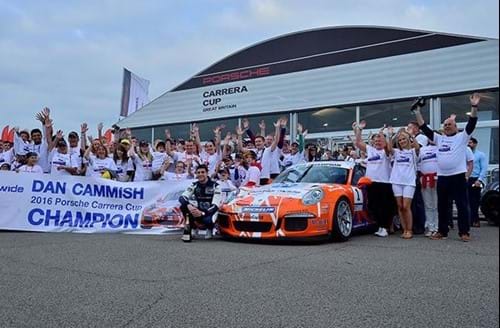 Daniel Cammish put in a commanding performance to take two wins and a fastest lap time at Silverstone, achieving his 2016 title aim. The Leeds-based driver started on pole position for both rounds 13 & 14 of the Porsche Carrera Cup and ran an immaculate weekend to score all but one of the points on offer.

Second to Dan was Dino Zamparelli, who had to outscore Dan to be in with a chance of winning the title. However, he started race one in fifth position and was unable to progress through the closely matched field. Meanwhile at the front, Dan was able to power away in his Nationwide Crash Repair/PPG-backed car to take a comfortable victory.

“It was quite hard in the middle of the race,” said Dan. “Sometimes you get days where you push so hard and work your socks off to win and there is massive elation. There are other days when it is almost anticlimactic. That first race certainly was, it was over after two corners and I never saw anyone again. I’ll take it all day long though. It shows the speed of the car because we were 1-2-3 as a team.”

However race two proved more challenging for Dan, as Stephen Jelley started alongside him and harried him for the duration of the race. The attention kept Dan on his toes as the relentless pace continued for all 28 laps of the Silverstone National circuit. Just behind Jelley was Zamparelli but a third place finish put the final nail in the coffin of his championship charge, and when Dan crossed the line it sealed his second title in two years.

“It was a tough race,” said Dan. “I was told when I went out that Jelley was on a new set of tyres and mine had already done half a race in qualifying so I thought it would be a real challenge. He was quick, every lap was like a qualifying lap, I don’t think he had anything left to give and I didn’t either and that was the speed we were going. Every lap was on the edge, nothing left. This race win means a lot to me.”

“It’s 11 wins and that equals last year. When we started this year people said you can’t do it again but we did and we’re all pretty pleased. The team did a great job and it has been a fantastic year. I’m really happy to defend the title because it was always going to be tough but it’s my third championship in five years so I’m really happy with that.”